We had the pleasure of having 13th Annual Pitching & Riding organizers Dusty Pearson and Marie Devinney stop by our campus to present the check from this year’s event. These ladies were the force behind this fabulously successful event that raised over $18,000 for Hospice & Community Care patients. Hospice would also like to thank the countless volunteers, bar owners, and the biking community for their continued support of this important event.  We also had the opportunity to speak with Mrs. Devinney who took the time fill us in on this year’s event and its meaning.

According to Mrs. Devinney, the event has always been called Pitching and Riding. “Numerous people have picked up the event and continued to support it over the years. This is the 13th year since Pitching and Riding was started by Buster Deal. It used to be a one-day event, but Kelly Tinkler and I changed it to a two-day event with horseshoes on Saturday and the motorcycle ride on Sunday.” 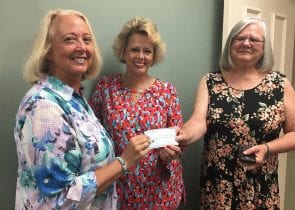 “Each year we reach out to corporations and local businesses for support. We also hold live and silent auctions and t-shirt sales.  There are also sponsorships, ticket sales, and registration fees.  All money raised goes to Hospice & Community Care. Every dime.  We don’t keep any of it.  And this year was the most we have ever done,” said Devinney.

“Hospice & Community Care is important to me. In 2001 my father was diagnosed with lung cancer and Hospice was there. They were angels. They really helped my dad, and whenever my mom had a need she would call and they would be there. Kelly also felt strongly about Hospice. Her mom had cancer and Hospice was there to help any way they could. We wanted to give back because they helped us so much.”

Devinney had originally planned to scale back this year to take care of her mom. However tragedy struck this July with Kelly’s passing, and Devinney felt she needed to step up.  “Dusty and I finished out this year. We had around 200 bikes for Riding on Sunday, nearly 300 people total not counting car riders. There were 30 people signed up for Pitching on Saturday. Total turnout was over 500, and it continues to grow every year.”

When asked about the event, Devinney said that it is open to anyone. “I tell people to come on out. It doesn’t matter if you drive a motorcycle or a car. It is an opportunity to participate in something great.”

“We are so thankful for everyone who showed up, willing to come out that day and raise money for a great nonprofit. We want to be there for Hospice & Community Care because they are there when you need them.”